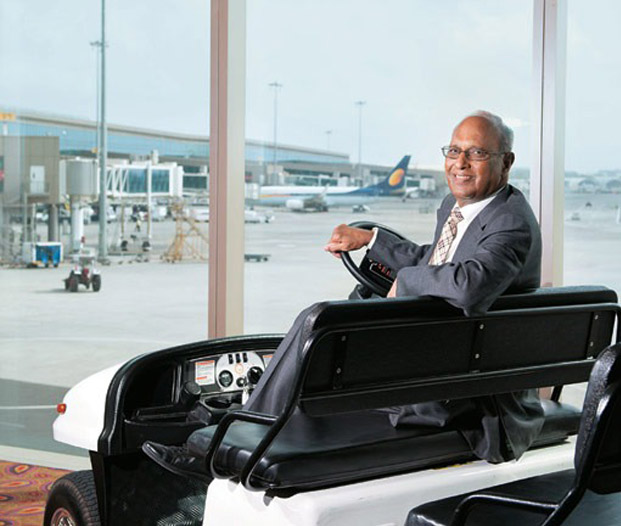 Dr GVK Reddy is the Founder and Chairman of GVK, a diversified business conglomerate with a predominant focus on infrastructure development. He began his career by contracting major irrigation projects including bridges, dams and irrigation canals. GVK has today emerged as one of the key players in India’s infrastructure development. Apart from Airports, Energy and Expressways, GVK has a significant presence in Hospitality and Urban Infrastructure.

Dr GVK Reddy has been a pioneer in India’s infrastructure sector. Guided by his vision and leadership, GVK has successfully implemented a host of projects in record time, including India’s first Independent Power Project at Jegurupadu in Andhra Pradesh; India’s first six lane expressway connecting Jaipur-Kishangarh in the state of Rajasthan and the operation and modernization of Mumbai’s international airport. GVK is currently working on the construction and development of the first phase of the 60 million passengers per annum Greenfield Navi Mumbai International Airport.

Dr. Reddy has been instrumental in the formation of GVK EMRI that is setting new standards in the field of emergency response services across India. It is the only organized professional free emergency service provider in the country operating the 108 Emergency Response Service, spread across India in15 states and two Union Territories, covering over 750 million people, and saves lakhs of lives annually. GVK EMRI operates with over 12,500 state-of-the-art ambulances employing around 47,000 people. In July 2016, GVK EMRI Lanka began operations of the 1900 Suwaseriya service in collaboration with the Government of Sri Lanka and assistance from the Government of India. This service has been expanded nationwide by the Sri Lankan Government during July, 2018 with technical knowhow from GVK EMRI.

Over the last two decades, Dr GVK Reddy has been the recipient of many honours, awards and accolades, most notable among these being a doctorate, the Doctor of Philosophy from the Jawaharlal Nehru Technological University, India in 2008, in recognition of his dynamism, outstanding brilliance and invaluable contribution to the field of entrepreneurship and society improvement. In 2011, the Government of India bestowed upon him the most coveted civilian award of “Padma Bhushan” at the hands of the President of India. Dr GVK Reddy is also an avid philanthropist and has set up the GVK Foundation which has been sponsoring and supporting underprivileged students in the field of education, housing schemes, and provision of drinking water to select villages in Andhra Pradesh and Rajasthan.